Archaeologists have no doubt that the interest in honey was already visible in antiquity, which is best evidenced by the vessels placed with it in the tombs of pharaohs. Even today we have not turned our backs on this natural food product. What is more, we increasingly pay attention not only to its unique taste, but also to its nutritional properties. One of the representatives of this species is buckwheat honey, which is worth getting interested in for at least a few reasons.

Those who believe that buckwheat honey cannot be confused with any other honey are right in many ways, as one of its distinguishing features is its appearance, which can be described as characteristic. Such honey has a colour typical for dark, strong tea, so the real honey from buckwheat can be distinguished relatively easy from imitations of it. The dark brown colour is not the only distinguishing mark. No less characteristic is the original aroma, although, because it is quite spicy, this honey does not always appeal to children.

Buckwheat honey - what does it help for?

When we consider what makes buckwheat honey so popular today, the healing properties of buckwheat honey certainly come to the foreground. In their context, it is worth mentioning first of all that it has strengthening substances and those that purify blood vessels. We are talking about a routine that is not found in other honeys, and which makes this honey a valuable support for older people, among others, who already have serious problems with atherosclerosis. The benefits resulting from the presence of rutin in the composition of this honey are more significant, as it cannot be forgotten that it is able to effectively oppose the decomposition of vitamin C. It also helps wound healing, which explains why so many doctors recommend including buckwheat honey in the diet of convalescents who are struggling with fractures. When we try to analyze the beneficial effects of buckwheat honey on our body, the pro-health properties of buckwheat honey are also known when we analyze its other components. In this context, it is impossible not to mention the magnesium, which regulates the heart's work, as well as iron, vitamin C and protein. Recently, tests by Slovenian doctors have confirmed that buckwheat honey can also be an excellent remedy for treating anaemia. If taken regularly, it helps both children and adults by raising blood haemoglobin and iron levels and supporting the regeneration of the body. 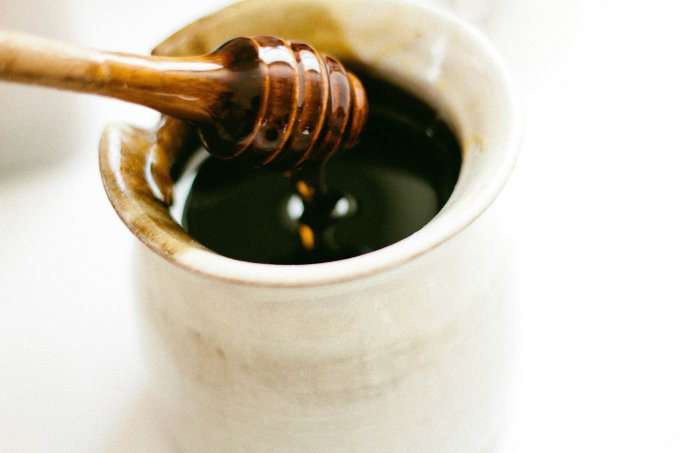 Many people are very cautious about this type of honey, not because it is unpalatable, but because of its calorific value. Indeed, we are dealing with a high-calorie product, as evidenced by the fact that the calorific value of a hundred grams of honey is as high as 340 calories. However, it is also a valuable source of simple sugars, which quickly penetrate into the bloodstream and nourish the body. It is also worth mentioning the wealth of valuable carbohydrates, which we can easily burn.

Although we most often meet him in the kitchen, buckwheat honey is also present in many other places. The content of rutin makes it often one of the ingredients of cosmetics, so we can count on its presence in anti-wrinkle creams, masks and peelings, among others. It cannot be otherwise, because it not only effectively opposes skin aging, but also has an antibacterial effect, which affects the use of acne symptoms, for example.

A jar of this valuable honey weighing half a kilo is an expense of 40-50 PLN. As with other honeys, the price may vary depending on the apiary in which it was produced and its composition. At the same time, it is always worth putting emphasis on fully natural solutions, even if they are to be a bit more expensive.

Kohlrabi - eat, and it will be coagulating!
Wheat belly - how to get rid...

Magnesium oil - how to use it?

Slow-rotating juice squeezer - which one to choose?